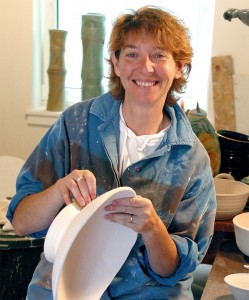 Mindy Moore has been a studio potter for 35 years. She first touched clay in high school and her experience on the potter’s wheel at that time inspired her to study ceramics. She went on to study at Syracuse University College of Visual and Performing Arts under the tutelage of Henry Gernhardt and David MacDonald where she received a BFA in Ceramics.  While there, she focused her ceramic art history studies on pottery of the Far East and was introduced to the Japanese concept of Wabi, which has greatly influenced her work from that point on.

Mindy lived in New York City following school, where she continued her work in ceramics while studying further with many artists including Betty Woodman, James Makins, and Byron Temple. She moved to Halifax, Nova Scotia in 1987 with her husband/photographer Marvin Moore. Her clay work continues in her studio at home. She also directs the Art program at the Shambhala School in Halifax, teaching art to grades 6-12.